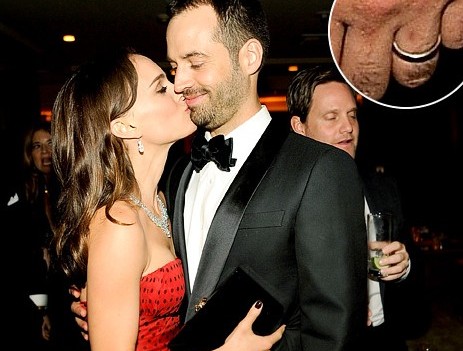 Natalie Portman looked glowing and gorgeous at the 83rd Academy Awards nominations luncheon on Monday. She is nominated for the Best Actress Oscar for her role in ‘Black Swan.’ Natalie announced her pregnancy and engagement to ‘Black Swan’ c…

Darren Aronofsky sure makes weighty demands of his actors.

The Oscar-nominated director had Natalie Portman and Mila Kunis lose big weight for their ballet drama ‘Black Swan,’ and now that he’s taking the helm of the next ‘X-Men’ movie, ‘The Wolverine,’ he’s making star Hugh Jackman gain major weight.

“Darren said with the last one, ‘Hey you looked great, but you’re so tall that in those long shots you looked kind of like Clint Eastwood, and that’s not Wolverine,'” Jackman told the Los Angeles Times. “He said that Wolverine, in the comics, is powerful, stocky…he’s short and thick. So he said, ‘I want you to go there, get bigger.'”

Natalie Portman’s stunning engagement ring is just as blinding as every other Hollywood ‘it’ girl’s, but leave it to the devoted vegan to flash an eco-friendly sparkler with an estimated value of $35,000.Portman’s ring was carefully designed…

Natalie Portman won the Golden Globe for Best Performance by an Actress in a Motion Picture for her role in ‘Black Swan.’VIDEO TO COMEThe other nominees:Read More…
More on Natalie Portman

As the Golden Globes names its big awards for 2011, we’ll have a running list of all the winners.Who did America predict to win? Check out HuffPost user predictions here.Read More…
More on Black Swan

Natalie Portman kept her engagement ring under wraps at the People’s Choice Awards Wednesday night, but Us Weekly has the first photos of the actress showing off her big diamond. Just after Christmas, Natalie announced that she was pregnant …

“Black Swan” star Natalie Portman arrived to LAX on Tuesday holding her pup and sporting what could be the first signs of a baby bump … or just the bulk generated from her shirt and sweater.Read More…
More on Natalie Port…

The dance is over. After a quietly dating for seven years, Mila Kunis and Macauley Culkin have quietly ended their relationship.”The split was amicable, and they remain close friends,” a Kunis rep told the New York Post. The paper also repor…

Natalie Portman On ‘Black Swan’: ‘I Thought I Was Going To Die’

Ballet entirely consumed Natalie Portman’s character Nina in ‘Black Swan,’ and, as it turned out, the character nearly consumed Portman.Gracing the cover of this week’s Entertainment Weekly, Portman discusses her preparation and difficult fi…

Natalie Portman is celebrating her newest release: Black Swan.  Her agent is also reporting that she and her Black Swan coreographer, Benjamin Millepied, are not only engaged but expecting a baby.  The baby is due in 2011….Read Full Post